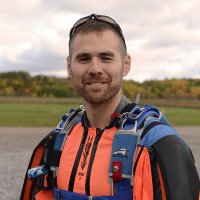 Born and raised in Toronto, Nick started skydiving 1997 with a static line course at Skydive Toronto but due to school and financial reasons have to give it up. The passion was re-ignited again in 2013 after a friend took him tunnel flying and prompted him to continue on in the sport. Ever since then jumps as often as he can and got into wingsuiting at the beginning of 2014. He represented Canada in the 1st FAI World Cup of wingsuit Performance Flying in 2015 and is proud to represent Canada again in 2016.